Casa Elena enjoys a prominently strategic position within the heart of Tuscany as from here all most historically, culturally and gastronomically interesting towns of Tuscany and Umbria may be easily and quickly reached. Here are some of the most interesting towns located in the surrounding of Cortona together with some brief historical information and their distance in kilometers. 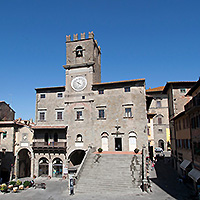 The town of Cortona stands high on a hill and has a spectacular view of the Valdichiana, Lake Trasimeno and Mount Amiata. Originally an Etruscan stronghold, Cortona was conquered by the Romans and Goths before becoming a free commune in the 12th century when it enjoyed a period of notable splendour. The historic centre of Cortona is represented by Piazza della Repubblica and by the nearby Palazzo Casali, which now houses the MAEC Museum (Cortona’s Etruscan Museum). The most important artifact is the famous bronze lamp which dates back to the V century B.C. Among the points of interest of Cortona we also find the Diocesan Museum opposite the cathedral, which contains the "Annunciation" by Fra Angelico and works by other major Tuscan artists, including Luca Signorelli, who was born in Cortona. Amongst Cortona’s most beautiful churches are the Gothic Church of S. Francesco and the Sanctuary of S. Margherita, which contains the body of the saint dead in 1362. The Medici fortress affords the best views of town and countryside and in the north east area of Cortona visitors can tour the hermitage called Eremo delle Celle, which was founded by Saint Francis in 1211. 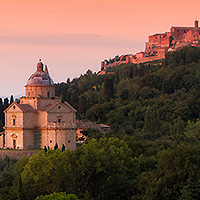 The highest of the Tuscan hill towns, Montepulciano, offers stunning views and fine examples of Renaissance architecture. Montepulciano is also know as the pearl of the 15th century where there are many famous buildings to see such as the Cathedral, the Loggia del Mercato, the Avignonese and Tarugi palaces and also the Bucelli Palace with burial urns and Etruscan and Latin inscriptions. Other places of interest to visit in Montepulciano are the Church of St Agnese, the patron saint of the town, and the Civic Museum. Montepulciano is also famous for its excellent Vino Nobile and other typical Tuscan products. 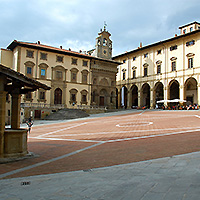 Arezzo lies 80 Km south of Florence and it dominates the beautiful valley in which the Valtiberina, Valdichiana, Casentino and Valdarno valleys all join together. The highest part of the town, dating back to the Middle Ages, is characterized by the main monuments of the town of Arezzo among which we find the Cathedral, the Medici Fortress, aristocratic palaces and picturesque towers. Arezzo was an important town during the Etruscan period, as shown by the two statues of the Chimera (now displayed in the Archaeological Museum in Florence). It continued to be very important under the Romans as shown by its beautiful vases and ceramics. The mayor things of interest to see are the Church of Santa Maria, which contains some paintings by Lorenzetti, and the Church of San Francesco with the frescoes made by Piero della Francesca. 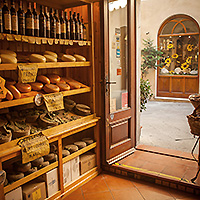 The medieval village of Pienza is to be regarded as a real monument as a whole in its orderliness and rationality and offers some incredible views of the Val d’Orcia, which was declared World Heritage Site by UNESCO, as if they were in a painting made by the best Renaissance artists. Particularly interesting monuments in Pienza are the Cathedral, the Palazzo Piccolomini and the Diocesan Museum, where works by Sodoma and a number of magnificent Flemish tapestries by the 15th and the 16th century are collected. Pienza is famous all over the world for its production of sheep cheese produced in the countryside of the Val d’Orcia amid its ravines and its rolling hills, the so-called “Crete”, and seasoned in a variety of different flavors ranging from walnut leaves and vinasse to pit seasoning. 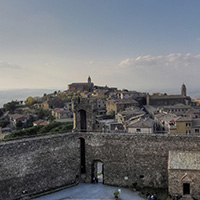 Montalcino is perched on top of a hill overlooking the Val d’Orcia, the Val d’Arbia and the Valle dell’Ombrone. A town having a typical medieval layout, during your tour to Montalcino you cannot miss to visit the Town Hall, the Cathedral and the churches of S. Agostino, S. Egidio and S. Francesco. In the Archaeological Museum you may see a number of interesting prehistorical and Etruscan findings from the area whilst in the Museo Civico you may see two terracottas by Andrea della Robbia. However, Montalcino is, above all, the home to one of Italy’s and Tuscany’s most important red wines: the Brunello di Montalcino. It is made from pure Sangiovese vines grown in the nearby hills and it is one of the best expressions of a territory and a landscape that are the very heart of Tuscany. 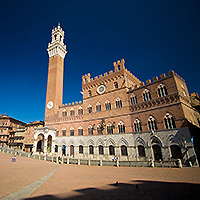 The medieval town of Siena is located south west of Arezzo, edging through the Chianti region. Formed by the meeting point of three hills on which Siena is built, the famous and spectacular Piazza del Campo is divided into nine sections commemorating the council of nine who governed the town in the 13th century. Twice a year, in July and August, the Sienese inhabitants faithfully recreate their medieval heritage in the Palio, a sumptuous pageant-cum-horse race taking place on the square. Moreover, some other important monuments are to be seen such as the Palazzo Pubblico, the Museum and the Cathedral built at the end of the 12th century. 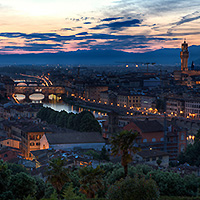 Florence is almost in the middle of Tuscany and the Italian peninsula, and it is one of the most important cities for art, architecture, culture, commerce and industry. Thanks to its central location, it can be easily reached by train and many other important towns are driving distance. Florence began its rebirth after the decadence of the Barbaric ages and reached its highest splendor between the 11th and the 15th century, as a free city. Then came under the rule of the Medici Family, who later became the Grand Dukes of Tuscany. This in fact was when the city was at the height of its glory in art and culture, in politics and economic power. Italian painters Cimabue and Giotto, the innovators of the Renaissance Brunelleschi and Donatello, and universal men like Leonardo and Michelangelo lived here. Among the monuments to see in Florence, you cannot miss a visit to the Uffizi (the most prestigious art gallery in the world), Michelangelo’s sculptures, the Medici Chapel, the Baptistery with its mosaics, and the Cathedral. 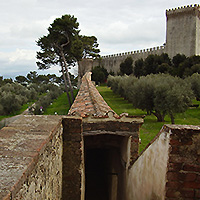 The town of Castiglione del Lago rises on a promontory that once formed the fourth island of Lake Trasimeno, the fourth largest lake in Italy. This area is rich of places to visit around Lake Trasimeno and there are boat trips in the summer to visit the three islands in the middle, which are very interesting for their landscape, flora and fauna. The best beaches are situated near Castiglione del Lago, nice Etruscan town, where the medieval walls and the ancient castle are still well preserved. 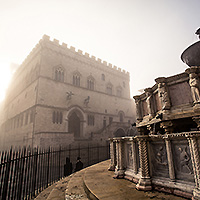 The city of Perugia is divided into five quarters, each named after the original city gates: Sant’Angelo, Sole, San Pietro, Eburnea and Santa Susanna. Piazza IV novembre is the city’s main square where you will find the San Lorenzo Cathedral finished in 1430 and the Fontana Maggiore designed by Fra Bevignate. Just opposite is the Palazzo dei Priori which still houses the municipal offices and the Galleria Nazionale dell’Umbria, which is one of central Italy’s biggest and best art galleries. The Collegio della Mercanzia, located on Corso Vannucci next to the Palazzo dei Priori, and the Collegio del Cambio, located in the same building, are the town's medieval money exchange offices and their walls were superbly frescoed by Perugino. At the Southern end of Corso Vannucci you can see the Giardini Carducci from where there are excellent views of the surrounding countryside. Among the points of interest of Perugia, the 16th century fortress Rocca Paolina is worth seeing: it was destroyed after the Italian Unification and its ruins remain a symbol of defiance against oppression. 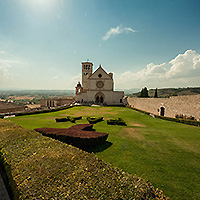 Assisi, the most enchanting and spiritual town in Umbria, lies at the foot of Mount Subasio. Founded by the Etruscans and later dominated by the Romans, the town is the birthplace of Saint Francis, Patron Saint of Italy. The main attraction of Assisi is the Basilica of Saint Francis, which was built in the 14th century and is an important pilgrimage destination. It consists of two churches: the upper one was built between 1228 and 1230 and the lower one was built between 1230 and 1253. Here you can admire beautiful frescoes by Giotto and Cimabue about Saint Francis' life. The entrance to the basilica dates back to the 5th century. Attached to the Basilica is the Franciscan monastery founded by Saint Francis in 1206. While vising Assisi you cannot miss another magnificent example of Gothic architecture: the Church of Santa Chiara where you can see the crucifix that spoke to Saint Francis according to what was handed down. 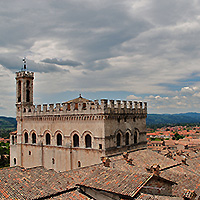 The Roman town of Gubbio has the most medieval appearance of the Northern Umbrian towns. Gubbio is famous for its local crafts, mainly ceramics, and for its well preserved medieval traditions, including the well renowned procession of the Candles in May. The place to start a tour of Gubbio is Piazza Quaranta Martiri, named after forty citizen shot by the Nazis in 1944. Here you can visit the Cathedral of the 13th century building, which is an admirable example of Gothic architecture. Other important monuments in Gubbio are the Plazzo Ducale, the Palazzo dei Consoli end the Roman Theater, a perfectly preserved 1st century amphitheater located at the foot of the town.